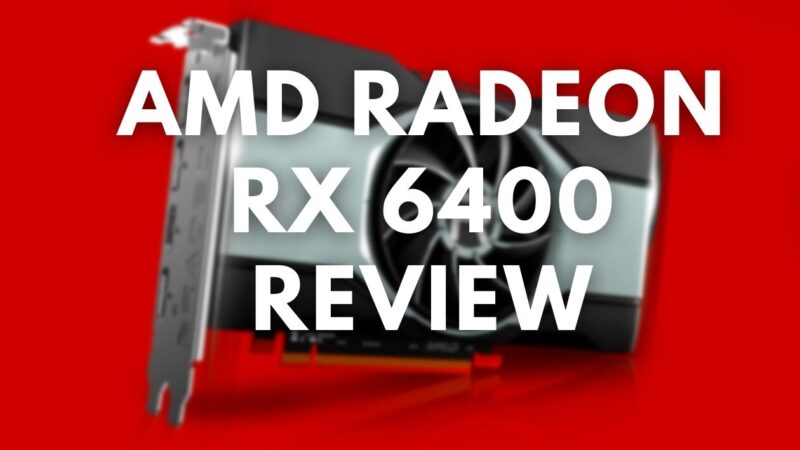 The all-new AMD Radeon RX 6400 is an RDNA2 GPU that comes in a small form factor size with a power requirement of less than 75W!

Just a few days ago, AMD has released its new entry-level card, Radeon RX 6400 for budget-oriented PC Gamers. This is a very low-profile card that comes with a tinny compact design. This AMD Radeon RX 6400 has been manufactured with a new RDNA2 Architecture that uses TSMC’s cutting edge 6nm process.

Besides, this card is compatible with both PCIe express 3.0 and 4.0 version Motherboard models. The power demand of this card is below 75W so there is no need to connect an external power cable from your PSU to run this.

The AMD’s 2022 model Radeon RX 6400 GPU is priced at $159 from the company’s official website. It is now available worldwide with all major online and offline retailers. But the cost of this GPU may slightly vary from one country to another country.

AMD’s RX 6400 is a new GPU to feature the latest AMD’s RDNA2 Architecture. The card is small in size and can easily fit inside a small Chassis or Pre-build PCs. According to AMD, this card is not capable of achieving any type of overclocking mode. The power and performance levels of this card are locked. When we ran the card with the latest AMD Adrenalin driver software, there was an Overclock settings option in the panel but that was unavailable for customization.

Besides, this card only supports a 64bit memory interface along with four lanes of PCIe 4.0 connectivity. Although these Graphics card also supports the older PCIe express 3.0 motherboards. With a limited amount of media encoding features, it has no capability to support 4K H264 and H265 encoding along with AV1 decoding. Also, AMD’s ReLive features are not available for this entry-level card.

We did some experiments with this GPU along with Nvidia GeForce GTX 1650 GPU separately by running some games at 1080p medium settings. For system build-up, we used Ryzen 7 5700G CPU, MSI MPG X570S Carbon Max motherboard, and GSkill 32GB DDR4 3600MHz Ram. Here are the test results below.

This AMD tiny card is very quiet and does not deliver a huge level of temperature even in heavy load mode. From our various types of experiments, we found that the maximum GPU Fan noise level was 25 dB and its chassis body did not cross more than 36 degrees celsius in our testing.

From all types of analysis, we can declare that this is a decent low-level card for those gamers who really want to enjoy PC gaming with a low budget. Obviously, this is an entry-level card and we cannot expect many more from this. Although this card performs well just slightly better than Nvidia’s GeForce GTX 1650 GPU in 1080p medium settings without any kind of problems.

So this was all about the AMD Radeon 6400 Review. Feel free to drop in your suggestion if you think we missed out on anything.