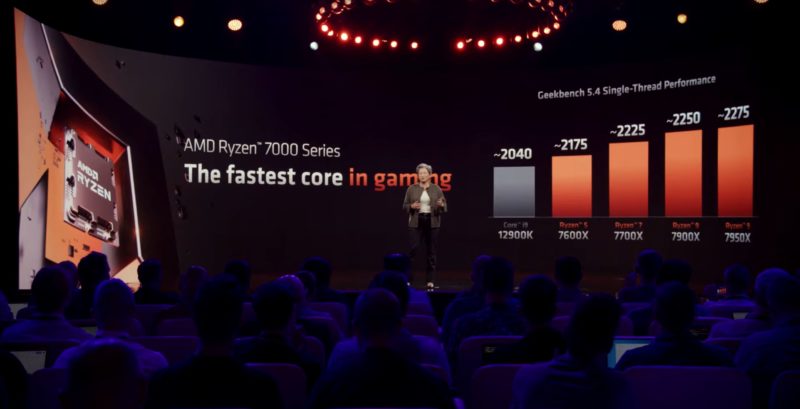 AMD is known for its Processors, and its price-to-performance ratio has been popular ever since. Although with the introduction of next-generation gaming, AMD did fall back with their older FX and Phenom Series Chips but got around the market share with their Ryzen CPUs, which are absolute monsters for the price with much better performance than their predecessors. Intel was also great in keeping up the competition with Ryzen but failed a couple of times because of its premium price and performance, which could not match up with the AMD Ryzens.

But with the Intel 12th Gen CPUs, Intel did see a performance boost by introducing the DDR5 Platform, and AMD still didn’t have DDR5 under them until now. But today, after much hype and anticipation, the AMD Ryzen 7000 Series has finally launched, bringing in new technologies with greater performance at a competitive price.

This was their first live event after the pandemic in Austin, and it was attended by many people, both online and offline. They showcased many products, including the full lineup of the latest AMD Zen 4 Processors featuring the AMD Ryzen 5 7600X, Ryzen 7 7700X, Ryzen 9 7900X, and Ryzen 9 7950X. AMD aims to achieve greater performance in cloud services, 5G networks, AI, Automotive technology, PCs, Laptops, Gaming & Simulation, and much more. We had a lot of rumours surrounding the AMD Ryzen 7000 Series!

So let’s jump in to see what AMD has for us this year with their latest Zen 4 Ryzen 7000 Series Processors!

AMD brings four new architectures to the market. These includes

These four architectures will be released in the market in the upcoming months and include a dozen products for you to choose from.

The new AMD Ryzen 7000 Series Processors feature the fastest core for gamers while featuring the most compute design for creators. They aim to combine their leadership core designs with the best energy efficiency technologies available.

The all-new AMD Zen 4 Processor is based on the 5nm process featuring PCIe 5.0 and DDR5 Support built on the all-new AM5 Platform. This is the first 5nm processor in the world and supports the latest technologies on launch. Earlier, they stated that the Zen 4 chips would be 8-10% faster than Zen 3, but with their recent optimizations, they are now being able to see a growth of 13% in desktop applications, with 5.7Ghz max frequency, with 29% faster single-core performance than its predecessor.

This is AMD’s flagship processor for both Gamers and Creators.

This is a great processor for Creators because of the massive performance increase. The AMD 7950X will be worth your money. AMD brings in 62% more performance with a whopping 47% better energy efficiency. Apart from the 7950X, there are three more processors launched by AMD.

The all-new 7000 Series CPUs have faster single-core performance than the Intel Core i9 12900K when tested using the Geekbench 5.4 Single Thread Performance Test, and faster single-core performance means better gaming. The AMD 7600X gives more than 400+ FPS. Thus, it is 11% faster than the Intel Core i9 12900K on F1 2022, 2% faster in Shadow Middle Earth and 17% faster in Rainbow Six Seige. Although the 7600X falls behind in GTA 5 by 3% while maintaining a TIE in Cyberpunk 2077.

The AMD Zen 4C is mainly targeted toward cloud computing. It delivers the identical functions of the Zen 4 in just half of the core area coming out in 2023 for the Server lineups. These are mainly for PCs that don’t need to run at high frequencies all the time. The Zen 5C will also be taking the place of the Zen 4C in 2024.

AM5 Platform for AMD

The new AMD AM5 platform will feature a 1718-pin LGA socket, with up to 230W Socket power delivery. The new Platform will also support DDR5 and PCI-E 5.0 and be compatible with AM4 coolers.

The Extreme boards will allow the PCIe 5.0 to power both Graphics and Storage, while the non-extreme ones will only support PCI-E 5.0 storage. The X series motherboards are already available in September, and the B Series are made available by October. The DDR5 Support on this motherboard promises to deliver outstanding performance starting from 5200Mhz.

The all-new AMD CPUs are available from 27th September 2022.

So this was all about the latest Ryzen 7000 Series Processors launch. If you feel we have missed out on anything, let us know in the comments below.