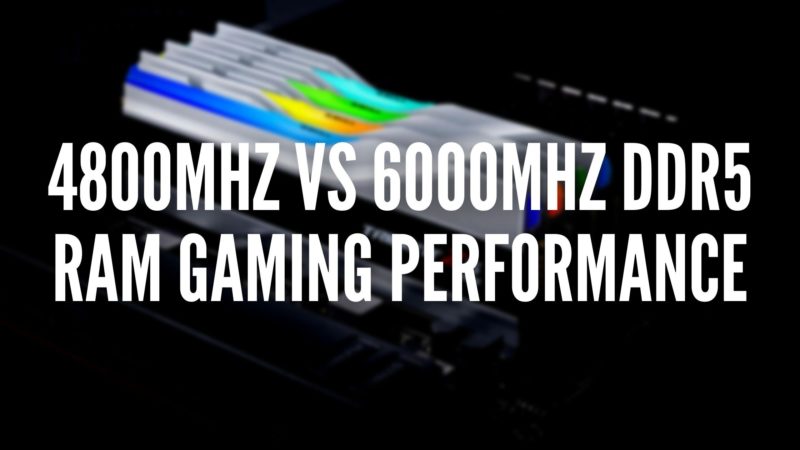 Who says RAM Speed doesn’t matter in Gaming? This 4800Mhz vs 6000Mhz DDR5 RAM Gaming Performance will prove you wrong!

Currently, the available RAMs in the market come in three different speeds, 4800Mhz, 5200Mhz and 6000Mhz, in terms of DDR5 Memory. The DDR5 Memory is the latest platform on which the next generation PCs and Consoles are built. DDR5 is a successor of the DDR4 RAM, although you will still find DDR4 RAM available in the market.

The pricing of the DDR5 Memory is relatively high right now because it is a better and newer platform, but the price will fall once DDR5 becomes mainstream in the market. The Kingston Fury 4800Mhz RAM we are testing out today is priced at $150, while the Gskill Trident Z5 Series 32GB RAM is priced at $755. But is the price difference justified?

So without further delay, let’s check out the 4800Mhz vs 6000MHz DDR5 RAM Gaming Performance and how much difference the speed of the RAM makes in Gaming and whether the expensive RAM is worth it or not.

Here are the performance results of the expensive 6000Mhz DDR5 RAM vs the cheap 4800Mhz DDR5 RAM. All the games are tested at 1080p resolution.

As you can see from the performance results we have achieved, the higher frequency RAM did make an advantage in terms of the Gaming performance. The 6000Mhz DDR5 RAM is giving almost a 10FPS boost in nearly all the titles except for Spiderman Remastered, where we have seen an almost identical average FPS on the lower 4800Mhz RAM as well. But for most of the games. The RAM speed did matter a lot.

The maximum FPS difference that we found is on PUBG, with almost 18 FPS differences. Although the system we ran the test is top of the line, rest assured, if you are getting a higher frequency 6000Mhz DDR5 RAM, then you will definitely get the performance boost in both games and content creation applications. But the price difference between Kingston and Gskill is not justified for a performance difference of 10FPS. But the Gskill one does have a higher memory speed and RGB and can be a better option for the future.

So this was all about the 4800Mhz RAM vs 6000Mhz RAM Gaming Performance benchmarks. If you think we have missed out on something, let us know in the comments below.